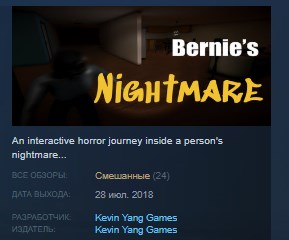 15-year-old Bernie Janson had a normal, high school life, before a terrible car crash sending his mother to death. What´s worse, he was in the car with her and he watched her die but unable to help. Bernie became overwhelmed with trauma and couldn´t leave his house for days. But he saw his mother once again...

One day, Bernie discovered a new type of horror game called The Nightmare Machine. By scanning deep inside the player’s brain, it brings out their deepest fear and turns it to a physiological horror that will hunt them. Bernie was brave and decided to play. And before he knew it, he was seconds away before blasting off in what he presumed to be a horror game. Horror? Yes. Game? No. What he saw was real. He saw his mother. But is it really his mother? Or a sociopath. Or is it just a game? Reveal the truth in Bernie´s Nightmare...

The Escape
Bernie wakes up inside this strange house he had never seen before. His head is hurting like it’s going to explode in any second. He sees a table besides him. There is a flashlight and wait! There is also a note - Welcome to the Nightmare machine. Immediately Bernie remembers what’s going on. He then hears a familiar woman’s voice crying, it is his mother. But is it? His mother is now a half human half zombie with a burned face and mouth that shows all her teeth. Bernie doesn’t feel very good, he wants to stop this game. But there is no way to this, except going through the main door in the house, that’s locked and the key is nowhere to be seen. In order to return to reality, Bernie must search the house for the way out while avoiding his monster mom who tries to kill him.

The Gameplay
You play as Bernie, search the house and find the way out. There are places you can hide, puzzles for you to solve, objects for you to find. There are 3 difficulty modes: Easy, Hard, Impossible. If it’s your first time playing, try the easy mode to get a feel of what to do, you have the ability to turn on lights in the house. With the Hard mode, there are no lights in the house except your flashlight. If you manage to survive, challenge yourself with the Impossible mode. In which Marny- Bernie’s mom always knows where you’re at. You must be completely familiar with the map and be creative with the gameplay. Good luck!