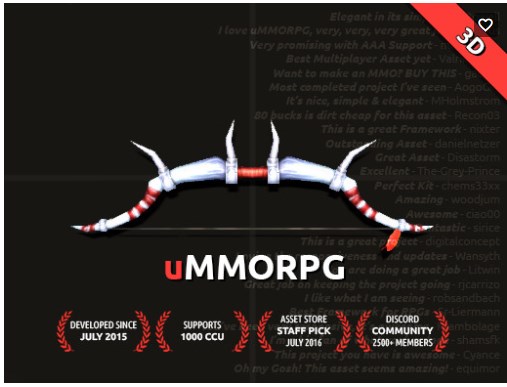 “In the information age, the barriers just aren´t there. The barriers are self imposed. If you want to set off and go develop some grand new thing, you don´t need millions of dollars of capitalization. You need enough pizza and Diet Coke to stick in your refrigerator, a cheap PC to work on, and the dedication to go through with it. We slept on floors. We waded across rivers.” ― John D. Carmack, Masters of Doom

The MMORPG Dream
20 years ago, MMORPGs used to require millions of dollars of capitalization and large teams of developers.

And then came Unity, with its mission to democratize game development.

uMMORPG´s mission is to go one step further to democratize MMO Development.
It´s time to begin the era of the Indie MMORPG.

Why uMMORPG?
uMMORPG is the most simple and easiest to use MMO engine on the planet for one reason: 99% of the MMO projects fail because they are too complex.
Keeping both the code and the architecture incredibly simple is of utmost importance for the lone wolf developer.

Networking
uMMORPG uses Mirror for its high level networking and Telepathy for its low level networking. With Mirror, the Server & Client are ONE project and share 95% of the code. (hence the name "Mirror"). Thanks to Mirror, uMMORPG requires less than 10k lines of code while still scaling to 500-1000 CCU easily.

uMMORPG´s networking is completely vertically integrated. The full networking stack was designed specifically for uMMORPG and is being improved every single day and battle tested by hundreds of other Unity networking projects.